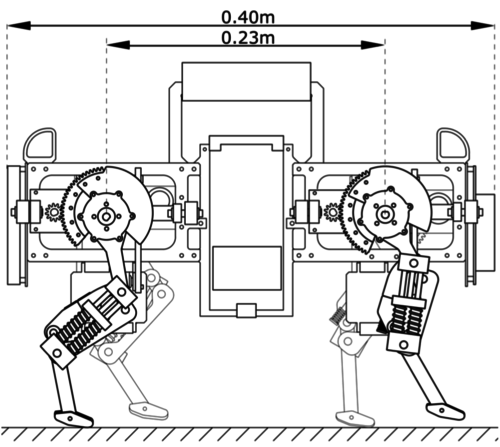 Frontiers in Robotics and AI, 5(67), June 2018, arXiv: 1803.06259 (article)
Abstract
We present Oncilla robot, a novel mobile, quadruped legged locomotion machine. This large-cat sized, 5.1 robot is one of a kind of a recent, bioinspired legged robot class designed with the capability of model-free locomotion control. Animal legged locomotion in rough terrain is clearly shaped by sensor feedback systems. Results with Oncilla robot show that agile and versatile locomotion is possible without sensory signals to some extend, and tracking becomes robust when feedback control is added (Ajaoolleian 2015). By incorporating mechanical and control blueprints inspired from animals, and by observing the resulting robot locomotion characteristics, we aim to understand the contribution of individual components. Legged robots have a wide mechanical and control design parameter space, and a unique potential as research tools to investigate principles of biomechanics and legged locomotion control. But the hardware and controller design can be a steep initial hurdle for academic research. To facilitate the easy start and development of legged robots, Oncilla-robot's blueprints are available through open-source. [...] 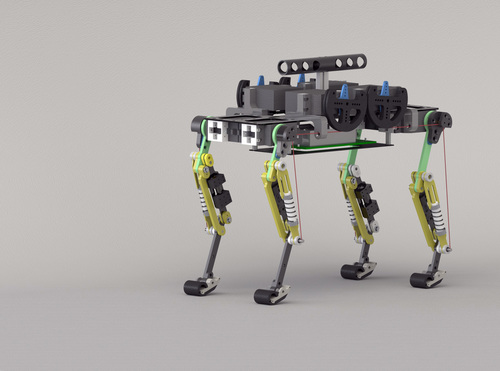 {The International Journal of Robotics Research}, 32(8):932-950, Sage Publications, Inc., Cambridge, MA, 2013 (article)
Abstract
We present the design of a novel compliant quadruped robot, called Cheetah-cub, and a series of locomotion experiments with fast trotting gaits. The robot’s leg configuration is based on a spring-loaded, pantograph mechanism with multiple segments. A dedicated open-loop locomotion controller was derived and implemented. Experiments were run in simulation and in hardware on flat terrain and with a step down, demonstrating the robot’s self-stabilizing properties. The robot reached a running trot with short flight phases with a maximum Froude number of FR = 1.30, or 6.9 body lengths per second. Morphological parameters such as the leg design also played a role. By adding distal in-series elasticity, self- stability and maximum robot speed improved. Our robot has several advantages, especially when compared with larger and stiffer quadruped robot designs. (1) It is, to the best of the authors’ knowledge, the fastest of all quadruped robots below 30 kg (in terms of Froude number and body lengths per second). (2) It shows self-stabilizing behavior over a large range of speeds with open-loop control. (3) It is lightweight, compact, and electrically powered. (4) It is cheap, easy to reproduce, robust, and safe to handle. This makes it an excellent tool for research of multi-segment legs in quadruped robots. 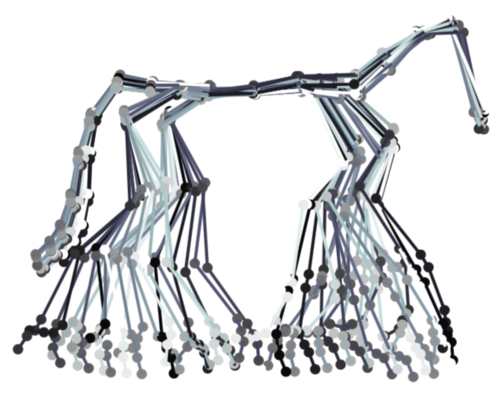 Horse-Like Walking, Trotting, and Galloping derived from Kinematic Motion Primitives (kMPs) and their Application to Walk/Trot Transitions in a Compliant Quadruped Robot

Biological Cybernetics, 107(3):309-320, 2013 (article)
Abstract
This manuscript proposes a method to directly transfer the features of horse walking, trotting, and galloping to a quadruped robot, with the aim of creating a much more natural (horse-like) locomotion profile. A principal component analysis on horse joint trajectories shows that walk, trot, and gallop can be described by a set of four kinematic Motion Primitives (kMPs). These kMPs are used to generate valid, stable gaits that are tested on a compliant quadruped robot. Tests on the effects of gait frequency scaling as follows: results indicate a speed optimal walking frequency around 3.4 Hz, and an optimal trotting frequency around 4 Hz. Following, a criterion to synthesize gait transitions is proposed, and the walk/trot transitions are successfully tested on the robot. The performance of the robot when the transitions are scaled in frequency is evaluated by means of roll and pitch angle phase plots.